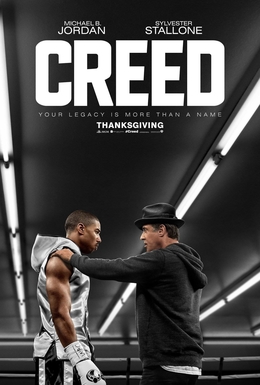 What made 1976’s Rocky such a brilliant and celebrated picture? At its heart, the movie wasn’t about boxing, or about a particular opponent. Rocky was about the struggle within. It was about overcoming yourself and exceeding expectations, regardless of winning or losing.

Rocky’s II – V went away from this formula, and made the films more about defeating a villain than the metaphor. Rocky VI steered back in the direction, but still didn’t truly tap the full true potential of the Rocky franchise. Alas, it took six more Rockys and 40 years to come to Creed, the most compelling character study since the original film that captured the Academy Award.

Creed centers around Adonis “Donnie” Johnson (Michael B. Jordan), the illegitimate son of Apollo Creed. He was rescued out of the foster care system by Apollo’s wife Mary Anne (Phylicia Rashād), who provides a stable home in Los Angeles and a world of opportunities away from boxing. Johnson ends up at a hedge fund, but has been fighting on the side in Mexico. Ditching his cushy lifestyle, Johnson moves to Philadelphia to pursue boxing full time, recruiting Rocky Balboa (Sylvester Stallone) as his trainer. Eventually, an opportunity opens up to fight world light heavyweight champion “Pretty” Ricky Conlan, setting up a tantalizing and thoroughly satisfying choreographed climax to the film. The final fight scene on its own brought the audience to raucous cheers, resembling the closest thing I’ve seen to an actual boxing match on film.

What would drive someone to do something like this? Why would anyone leave a luxurious LA lifestyle to go train in the inner city of Philadelphia? It’s a question that is answered in wonderfully told exposition. When Creed (as he finally goes by in the latter parts of the film) reveals his driving force, he has fully won over the audience. He is a flawed hero, something that we can all relate to. Still, while the film focuses on personal demons rather than the opponent, we’re predisposed to dislike Conlan in the same way that people have grown to despise Floyd “Money” Mayweather in real life for his extracurricular activities.

By shifting the focus of the film to Creed, it allows Stallone to deliver one of the best performances of his career. We are reminded again of why Balboa is such a relatable figure, and why he’s become such a cultural icon for the underdog. Jordan merely turns in an adequate performance, but is cast well for a white collar man trying to make it in blue collar world. In the same vein, Creed’s girlfriend Bianca (Tessa Thompson), seems like a throwaway character, only added because a Hollywood checklist necessitated that Creed have a love interest. The reality is, the film would’ve been fine without her, and likely 30 minutes shorter.

Being that this is a Rocky movie, there are plenty of references to previous canon. But what’s particularly enjoyable about Creed is that while director Ryan Coogler pays appropriate homage to the franchise, he doesn’t let the legacy of the film overwhelm us in the present. We hear “Gonna Fly Now” as we have in all of the other movies, but it’s at an apropos moment. Apollo, by fathering an illegitimate child, is necessarily knocked off his pedestal. Balboa and Creed climb the steps of the Philadelphia Museum of Art, but Balboa struggles for other reasons that I’ll leave the viewer to discover.