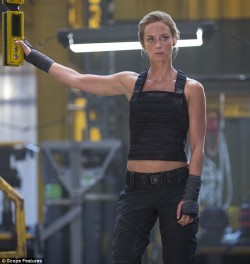 The dazzling actions scenes of Transformers meets the loop in the space-time continuum of Groundhog Day in a perfect blend of heart-pounding action, well-told exposition and occasional touch of humor in Edge of Tomorrow.

Tom Cruise stars as Major William Cage of the United Defense Force, who is involved in the public relations side of an ongoing war with the Mimics, and alien race bent on destroying humanity. After a spat with General Brigham (Brendan Gleeson), Cage is demoted to private and is sent off to England as a ground troop in a large scale invasion against the enemy. The invasion proves disastrous, and Cage perishes while killing an unusually large mimic nicknamed an “alpha.” The killing of this alpha traps Cage in a time loop. In one of the loops, he meets Sergeant Rita Vrataski (Emily Blunt), who has experienced a similar fate before, and helps Cage hone his abilities as a fighter. However, each time Cage dies, everything resets, including the memories of everyone around him.

While Cruise headlines the movie, in reality, the film belongs completely to Blunt. She completely steals the show with her portrayal of Vrataski, though I’m torn as to the gender roles portrayed in the film. On the one hand, Vrataski is portrayed as a highly capable soldier, who is far superior in combat skills to Cage in the early part of the film. She is the one who needs to train and protect a clumsy and mostly inept Cage. On the battlefield, she is ruthless and calculating in her utter dismantling of the enemy, in sharp contrast to societal ideals of women being too fragile for war. But Vrataski still reminds me of Trinity from the Matrix. Though Trinity was Neo’s superior in both rank and combat skills in the beginning of the trilogy, she ultimately played a back seat to Neo in becoming the “chosen one” to save the human race. Vrataski is at her core essentially the same character, and plays second fiddle to Cage’s abilities by the end. Her character seems to be the new paradigm for feminism in Hollywood: Appease women by scripting strong female leads, but ultimately make the male character superior by movie’s end.

I was also puzzled by the decision to have Vrataski kiss Cage near the conclusion of the film. At that point, Vrataski had only known Cage for roughly 36 hours and had no memory of any of the other loops. If anyone was to make the first move, it would obviously be Cage, who had developed feelings for Vrataski over the many loops he had remembered. The kiss also seems completely out of character for Vrataski, who up until that point is portrayed as a grizzled soldier. That is not to say that Vrataski didn’t have another side to her, but nothing up until that point suggested she would do otherwise. Perhaps one day, a film will portray the female lead in a truly feminist light.

Before I had seen the movie, I read the book it is based off of, All You Need Is Kill by Hiroshi Sakurazaka. The movie for the most part stays true to the book, although I was disappointed with Hollywood’s rewrite of the conclusion. Sakurazaka’s ending was significantly more dark, but falls more in line with what we consider when we think of war. In that version, the main character Keiji Kiriya discovers he has to also kill Vrataski in order to end the loop. The idea of only one person realizing the recurrence of time is a lonely notion. That notion can be even more isolating when you kill the only person who can sympathize with you. Edge of Tomorrow softens and sugar coats this more edgy ending and ends up with fluff.

That isn’t to say that the plot didn’t have its strong points. The danger with movies that loop like this is that the story can get repetitive and stale quickly. But the loops are kept fresh enough with each reset and the plot is pushed along at the right pace. Better yet, the brilliantly executed action scenes are done within the context of the movie instead of being needlessly over the top. The plot is simple enough to absorb quickly yet complex enough to keep us engaged. And for those of you who aren’t fans of Cruise, another benefit to the movie is that he dies at least 20 times throughout the film.