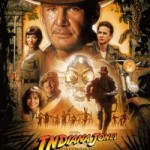 Nineteen years of creative thinking and collaborating, and the best George Lucas could do was The Kingdom of the Crystal Skull? If Lucas could’ve taken one lesson from the Star Wars prequel blunders, it should’ve to leave a trilogy alone.

The year is now 1957, more than 10 years after the events of The Last Crusade, and in the height of the tension between Russia and the United States. Indiana Jones (Harrison Ford) is captured by Russian Colonel-Doctor Irina Spalko (Cate Blanchett), and forced to locate the remains of an extraterrestrial creature in Area 51 in New Mexico. Jones escapes and is subject to an FBI investigation, which leads to his dismissal at Marshall College.

He is told by Mutt Williams (Shia LaBeouf), that his old friend Harold Oxley (John Hurt) has disappeared after searching for a crystal skull in the grave of Francisco de Orellana, a Conquistador who went missing in the 1500s while seeking the Temple of Akator. Indiana Jones heads down there to investigate, where he is again captured by the Russians, who have also captured Marion Ravenwood (Karen Allen), Mutt’s mother. It is here we learn that Mutt’s real name is Henry Jones III, and Indiana is his father. The point of this exercise was to return a crystal skull to the Temple of Akator, and the first to do that would be granted unlimited power, which would certainly come in handy for the Russians.

The plot description was difficult to get through, mostly because it’s a far-fetched plot with a prize that isn’t all that interesting.

In the Last Crusade, Indiana Jones pursued the Holy Grail, perhaps one of the greatest relics in human history. It doesn’t matter i

f you’re a devout Christian or a gentile that has sat through social studies – there is a certain lore behind the chase of The Grail that everyone can relate to. (The Da Vinci Code being the best evidence of that.) Although not quite as famous, the Ark of the Covenant still has lore to it, considering that according to biblical scripture, the Ark came from the command of God himself, in accord with Moses’ prophetic visions.

Instead, the Kingdom of the Crystal Skull doesn’t capture the imagination like the last supper of Christ, or the visions of a man who once split the seas. The Temple of Akator might be an interesting footnote in history, but the concept just falls flat on the screen.

But beyond the inherent plot problems, the action sequences are woefully executed. There is never any real sense of danger or peril to Indiana Jones, or any of his companions. No matter how many bullets fly at our protagonist, he is impervious to damage. At least in the previous three movies, the action was taken someone more seriously.

During one chase through the South American forest, Mutt fences (yes, with swords) with Irina while standing with one foot on a car being driven by Marion and the other car being driven by one of Irina’s henchmen. At any point, the henchmen could’ve just stopped short, or accelerated, or done anything but match the speed of Marion’s truck. Of course, none of that happens. What does happen, is that one car being driven by Marion disappears for large stretches, only to reappear just in time to save either Indiana or Mutt.

In another part of the same chase sequence, Mutt ends up caught in the trees while the trucks race off into the distance. Not a problem for him, since he starts swinging through the vines like Tarzan. This kind of silliness is riddled throughout The Kingdom of the Crystal Skull. (There is another scene where Indiana Jones survives a nuclear bomb testing by placing himself in a lead refrigerator.)

That isn’t to say that the previous three movies didn’t have the occasional improbable action sequence, but there was a balance between the impossible and reality that kept the movies fresh and thrilling. There was a scene of true excitement when Indiana switched the bag of sand for the idol, or when the professor took the leap of faith on the cliff edge guarding the Holy Grail. Nothing in The Kingdom of the Crystal Skull will come close to matching those timeless Hollywood moments.

Indiana Jones and the Kingdom of the Crystal Skull disappoints on so many levels, failing to recapture the magic and imagination that was so prevalent throughout the three prior movies. It has taken an invincible franchise, and added a very minor, forgettable chapter. In the end, Indiana Jones 4 serves as more of a contrived reunion of characters who are significantly past their primes.