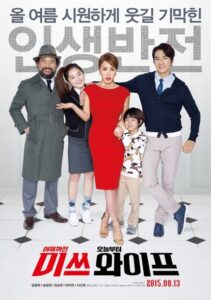 A cold, calculating, highly-successful single lawyer is forced into the body of a lower middle-class, unemployed, married woman with two children. Hilarity and romance ensue.

That, in two sentences, is the plot of Wonderful Nightmare, a 2015 South Korean romantic comedy film that was featured on the final night of the 2015 New York City Korean Film Festival in Astoria, New York. If you’ve heard of that plot before, it’s probably because you remember Nicolas Cage’s 2000 movie Family Man.

Any review of what is essentially a remake of a movie doesn’t have to turn on originality so much as execution of the story. And, for the most part, Wonderful Nightmare does exactly that, turning a thoroughly unlikable lead character Yeon-woo (Uhm Jung-hwa) until a more humbled version of herself by the end of the film. As in the tradition of Korean films, director Kang Hyo-jin throws in several plot twists designed to wrench the heart and bring tears to the audience’s eyes.

Kang takes his time developing the plot, which is essential to properly tell this story. He sets up Yeon-woo as an enemy of the audience, and plays this up for the right amount of time. Hastily set this part of the plot up, and the redemption in the end feels forced. Take too long to set this part of the plot up, and the audience forever turns on the main character. He also takes his time putting her through her paces, slowly chipping away at Yeon-woo’s armor until we understand reason for her dour personality. By the end, she’s truly endeared herself to the audience, which can only really be done by good story telling. Kang deserves his kudos for this.

Still, there are several glaring flaws with this movie. Although Wonderful Nightmare is billed as a romantic comedy, there isn’t much romance in the movie between Yeon-woo and her husband, Sung-hwan (Song Seung-heon). While they are married, and Yeon-woo does truly come to respect and admire Sung-hwan by movie’s end, they don’t share as much as a kiss, much less any on-screen chemistry.

As for the comedy aspect of the film, Yeon-woo is transferred into another woman’s body and is told the ground rules well before hand, yet appears completely shocked by her new circumstances. Of course, because this is a comedy, the “fish out of water” is played up, much in the same way that it was in Family Man. But it drags on for far too long, and borders on cheap slapstick jokes for equally as cheap laughter.

Upon deeper inspection, there’s also two main social commentaries here, one of which I object to. The first is that money is not the most important thing in life, and families are at the core of true happiness. I will certainly not argue this particular moral of the story. Family Man conveyed the same point. However, the second lesson (which I found to be borderline cringe-worthy) to be taken away from Wonderful Nightmare is that a woman’s place in society is not in board rooms or high-level legal negotiations, but rather tending to the home and being an obedient housewife a la Shakespeare’s Taming of the Shrew. Surely, we have evolved in our gender roles since the 15th century.

If you’re willing to get past these flaws, which, for the most part, I was able to, it becomes a touching story about redemption and forgiveness that is sure to leave you misty-eyed with a few laughs interspersed for good measure.