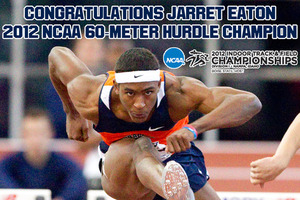 Whether it’s a race in the familiar confines of Abington High School or a pressure packed NCAA National Championship 2,500 miles away, Jarret Eaton and mother Sharon have a long standing tradition.

Dominating win or heartbreaking loss, mother and son will convene.

“He’ll call me up, and I’ll congratulate him,” Sharon says. “But I’ll ask him after every race, ‘Jarret, can you go faster?’”

The answer has evolved over time, mirroring the rise of Eaton from a part-time hurdler at a small college in Pennsylvania to an elite athlete at Syracuse University with Olympic aspirations.

Nowadays, the answer is, unequivocally, “I can go faster.”

Eaton grew up in Abington, Pa., a suburb of Philadelphia, about 30 minutes outside of the city. The third of four brothers, Eaton never had a shortage of competition around him.

“I got them involved young,” Sharon says. “They played flag football at five years old.”

But there was something more important that Sharon instilled in Eaton at an early age – discipline.

“My mom was strict and kept me out of trouble,” Eaton says. “I had a couple friends who went in the wrong direction. I lost a couple of friends like that.”

“I wasn’t trying to be their friend,” Sharon says. “What counted is that I laid down some principles and routines and traditions.”

That included a strong religious upbringing.

Before every race or any kind of competition, Eaton’s routine always includes the prayer, “I can do all things through Christ which strengthens me.”

By Eaton’s senior year of high school, he was the Pennsylvania state champion in both 110 and 300 meter hurdles, clocking times of 14.03 and 37.28 seconds, respectively. He also starred at wide receiver and cornerback on the football team.

It complicated matters when it came time for Eaton to pick a college.

“I thought I’d have to give up (either football or track) to go to a college,” Eaton says. “I didn’t get heavily recruited for track.”

When coaches at Division II West Chester University in Pennsylvania told him he could play both, Eaton jumped at the opportunity.

During his freshman year on football, Eaton played mostly on special teams, primarily as a gunner on kickoffs. He used his speed and agility to record 16 tackles.

But what happened during the winter season would transform his life.

Eaton exploded on the track, blazing through the 60 and 110-meter hurdles in 7.84 and 13.90 seconds. He was a 2008 All-American and was named Northeast Regional Athlete of the Year in Division II.

The coaches called Eaton with encouraging, though difficult, news.

“You’re going to have to leave the school,” Eaton was told. “You’re doing too well and you have to be pushed.”

It meant that Eaton was going to have to focus exclusively on track.

“It was a hard decision for me to leave football,” Eaton says. “Do you want to live without your right or left lung? You can still live without one, but it’s going to be hard.”

I THINK I CAN…

When it came time to pick a Division I school, Syracuse immediately came to mind.

Eaton was at a meet at Penn State during the spring track season at West Chester when something rare happened—he was beaten in the hurdles.

It was to SU hurdler Ramon Sosa, who later came to mentor Eaton.

“I want people who are faster than me who I can learn from,” Eaton says.

Eaton took an official visit to Syracuse and liked the facilities and environment.

A short time after his official visit, Eaton called assistant coach David Hegland with more questions about the program.

“He drove down four hours to talk to me at a Starbucks,” Eaton says. “That to me said he wanted me.”

“We sat down and just outlined what we could do for him, but more importantly what he could do athletically,” Hegland says. “The people we had at a high level like him had improved and gone to national meets. We thought he was that kind of talent.”

It was an easy choice for Eaton after that.

Eaton made one more phone call to Hegland, telling him that he’d be attending Syracuse.

“I was jumping up and down in my living room,” Hegland says.

By his junior year, Eaton won the Big East title in the 110-meter hurdles in 13.85 seconds. In winter track, he was named the Northeast Region Men’s Athlete of the Year.

“He’s just become more efficient,” Hegland says. “He’s always someone who’s coming in and checking out the film, seeing what he’s doing wrong. We compare him to some of the world class guys and he’s been diligent about it.”

In time, Eaton had become a leader of the team.

“I can’t say enough about him,” Hegland says. “He’s just a great kid and a leader by example.”

In that same time, he had become a leader in the family, as well.

In May, Eaton will graduate with a degree in public health. He’ll become the first in his family to earn a college degree.

“That’s a very big deal,” Sharon says. “We all went, but none of us finished. He’s the first to do what none of us was able to.”

He likely won’t be the last.

Eaton set an example for his younger brother, Alex, who is attending California University of Pennsylvania. Like his older brother, Alex is a hurdler.

I CAN GO FASTER…

With Eaton’s success in his junior year, he became one of the favorites to win the NCAA championship in the 60-meter hurdles in his senior season.

“It was a tough load to carry all year,” Hegland says. “He had a lot of pressure all year and that’s a difficult thing to deal with sometimes.”

But Eaton dealt with it, and even thrived on it.

He started off the season well, winning the New Balance Collegiate Invitational and the 2012 Big East Championship.

It all culminated in a dramatic win at the Indoor National Championships in Nampa, Idaho. Eaton won the event with a 7.54 seconds, edging his nearest opponent by a scant .01 seconds.

“It was amazing,” Eaton says. “A huge weight lifted off your chest.”

It triggered a huge celebration back in Abington, where friends and family had gathered for Sharon’s birthday.

“We all hit the roof,” Sharon says.

While it was a career defining moment, Eaton hopes that it is one of many more to come.

“My birthday is June 24,” Eaton says. “I’ll be running in the Olympic trials. If you come in top three you get to go to the Olympics. That would be a huge present to myself just to make it, but I’ll be fine making the finals and making a name for myself.”

After that, Eaton aspires to compete all over the world, including the World Championships.

So far, it seems to have worked.