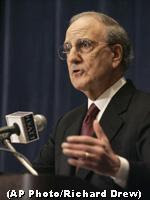 One year of investigating and $30 million later, and the much anticipated Mitchell Report was much ado about nothing.

The report, released last week, named roughly 80 players – some of them at the forefront of baseball – linking these athletes to performance enhancing drugs. It was worth a day-long special on ESPN and grabbed more than its share of headlines. It was a wakeup call to commissioner Bud Selig and a dawn of a new era of baseball.

Oh, there were a few marquee names in there. The headlines screamed Roger Clemens was the new Barry Bonds, and that his old buddy Andy Pettitte was caught red handed as well. But check back through the newspapers over the past two years, and you’ll see that there were already grumblings that Clemens and Pettitte had taken performance-enhancing drugs.

This report would’ve really had some teeth to it had it turned over a new stone. Perhaps if an Alex Rodriguez or a Ryan Howard were mentioned, this would be the kind of story it was made up to be. Imagine what a craze a headline of “Derek Jeter Juiced” would cause?

What’s even more disappointing is that for every superstar like Barry Bonds or Jason Giambi, there’s a name like Darren Holmes or Wally Joyner. That certainly pokes holes in a theory that says steroids automatically catapults the mediocre into the elite. If anything, it makes you wonder how bad Jerry Hairston would’ve been without the help.

And it’s not like baseball was ready with a strict system of punishment for anyone listed in the report. Likely, no suspensions will come out of this, and Pettitte and Clemens (if he so chooses to return next season) will suffer no ramifications, other than their names being tossed around on drive-time radio. If baseball was really serious about getting tough on drugs, or, for that matter, the report itself, they would’ve been ready with a trend-setting punishment for any of those named.

But let’s stick with the supposed “bombshell” of Roger Clemens for the moment. It’s not like the report has damning proof that Clemens actually took steroids. The crux of the report is based on a former trainer whose relationship with Clemens took a wrong turn a long time ago. It has to raise all sorts of red flags about his credibility. Can we really take at face value a trainer who has a bone to pick with Clemens?

I don’t doubt that there’s something fishy about Clemens being able to pitch in the mid 90s well into his 40s. Back in 1996, Clemens had a rising ERA and a declining win total beforeBostondecided to cut ties with their franchise ace. Instead, Clemens reversed course and suddenly found a fountain of youth, right around the time that steroids supposedly took off in baseball.

Coincidence or just a strict workout regime? We’ll probably never know the full truth, but at least the accusation is somewhat credible.

But until Clemens admits to taking steroids, or there’s an actual blood test that comes up positive, that’s all it will ever be –an accusation. An unsubstantiated claim that Clemens was juiced when he set those records. Without more, all the Mitchell Report has on Clemens is an ex-trainer with a checkered past.

Hardly the kind of ground-breaking news story that this report was hyped to be. In fact, it seems more like the report just amplified whispers of what was already suspected. Is it a shock to anyone that Sammy Sosa would be listed in this report? How about Jeff Bagwell? Rafael Palmiero?

The answer is, obviously not. The names have been run through the steroid rumor mill before, and until there is more damning proof, I’ll take a pass on this report.

Call me when a real story breaks.