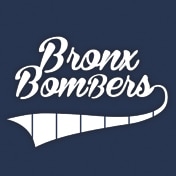 I seem to have hit the Eric Simonson trifecta. In 2011, I attended Simonson’s first sports play on Broadway, Lombardi, at the Circle in the Square Theatre on closing night. A year later, Simonson hit Broadway again, this time chronicling the 80s sensation of the NBA with Magic/Bird. Now, in 2014, I found myself taking in Simonson’s third foray into a major American sport, Bronx Bombers, which again finds itself at the Circle in the Square Theatre.

Bronx Bombers follows the tale of Yogi Berra through his time as coach of the Yankees during the famed Billy Martin/Reggie Jackson feuds of the 70s all the way through the closing of Yankee Stadium, the House that Ruth Built, in 2008. Along the way, we meet Martin, Jackson, Thurman Munson, Lou Gehrig, Micky Mantle, Joe DiMaggio, Ruth and Derek Jeter.

We start off with the Jackson/Martin feud that bombarded headlines on June 18, 1977, at Fenway Park when manager and player argued, and nearly came to blows, over Jackson’s effort (or lack thereof) in covering a fly ball in the outfield. It was a strong opening, with Berra and then-captain Munson trying to defuse the situation. It was a powerful scene with racial overtones, the implementation and impact of free agency, and a touch of realism that captivated the baseball world for that period of time. We’re also treated to the first of many Yogi-isms (“I didn’t say half the things I said”) peppered throughout the play, although it’s at least done within the context of what’s being said, and not just randomly parachuted into the play.

We’re then taken to a scene from the Berra household, where he and his wife hash out some of the problems keeping Berra up and night. Here, Berra has flashbacks of Ruth, who tells him not to give up on the team. Although I enjoyed the interaction between the two (actor and actress are married in real life), I didn’t really see the merit of this scene. This will become a recurring talking point. Once the lights went off for intermission, I was left to think: “Great. Berra is nervous about the Martin/Jackson tussle. Is that it?”

From there, the play takes a wildly strange turn, with Berra dreaming of an Algonquin Round Table of Yankee superstars that date back to Ruth and proceed forward to Jeter. It’s a bizarre scene, and I’m not entirely sure what Simonson was trying to convey here. To be sure, the greats all had their own personalities, and more than once, those personalities clashed.  The fictional meeting draws on some serious moments (Gehrig’s disease) to some corny humor (what’s a TV?). But what did this dream to do advance anything in the plot? If you’re going to put a who’s-who of Yankees together, shouldn’t there be some revelation to it other than “once a Yankee, always a Yankee?”

All of this leads to the final scene, which is the closing of Yankee Stadium in 2008. Jeter and Jackson meet Berra again before the stadium closes and Berra relinquishes his right to speak to Jeter. There is a moment of reverence paid toward Munson, who, as we know, died tragically in a plane crash. A nice moment, to be sure, but Munson was barely mentioned after the opening scene. As a result, we don’t have much of an emotional connection to the locker where Munson’s jersey still hangs.

So I ask Simonson again: What is the point of this play? Is it to pay homage to the Yankees? Is it to show the progression of the team over time? Is it a “the more things change, the more they stay the same,” type theme? It’s hard to tell.

I gave Simonson’s two previous plays on Broadway tepid reviews, and it wasn’t surprising that both lived very short stage lives on Broadway. I can’t imagine Bronx Bombers being much different. The plot is wildly inconsistent. The message is convoluted. The pace is uneven.

That actually somewhat resembles the actual Yankees in the Bronx these days.