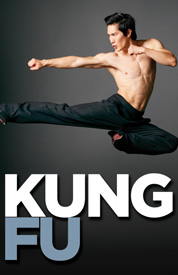 The play follows Bruce Lee (Cole Horibe) in his early days as a childhood martial arts star in Hong Kong through his struggles in trying to make it in the mainstream American media. Along the way, we meet the most seminal figures in his life, wife Linda (Phoebe Strole), father Hoi-Chuen (Francis Jue), and son Brandon (Bradley Fong).

More so than an average play, there needs to be an aura of credibility for the main character’s martial arts ability, and Horibe certainly possesses it. His martial arts skill, along with all of the other cast members, is at a high level, and the scenes are choreographed so well, you’d think that you were watching an old Hong Kong action film. There are plenty of action scenes throughout the play and all of them are thoroughly enjoyable. These scenes, in and of themselves, make the production a worthwhile show.

But the script has some serious issues. To start, there is an utter lack of chemistry between Linda and Bruce. With the way the play is written, I’m not actually sure what she sees in him. On their first date, Bruce spends all of his time talking about his favorite topic: Himself. And yet, she completely falls for him, which comes off more as puzzling and forced. While we all know that they ended up together, the play doesn’t really sell the idea of why, instead preferring to fast forward to their abrupt marriage. That dooms their storyline from the start.

Later in the play, Linda is forced to take a job during the night hours to keep up with a near impossible mortgage now that Bruce is out of work. Instead of taking jobs that would bring in steady income, Bruce turns them down because he’s not willing to kowtow to Hollywood’s stereotypes of Asians. While it’s certainly a noble cause in some respect, in letting his ego get in the way, he forces misery on Linda rather than letting his friends know that he’s in financial trouble.

We all get that Lee is being portrayed as an egomaniac (and by many accounts, he was) and this is far from a reverential look at Lee, but why does Linda put up with this? She did in real life. And, in real life, she must have had good reason. That reason is never revealed to us in the script.

This makes Linda’s character one of the least dynamic, uninteresting characters I’ve encountered. While I do think Strole does an admirable job as Linda with what she’s given to work with, the reality is, she’s not given too much other than being an obedient wife. Surely, there must be more to her.

The other relationship that is explored is cause for some pause, as well. Bruce carries a lot of anger with him because of his strained relationship with his father. While a disorderly relationship with a parental figure can certainly be a driving force (especially among Chinese families), the play doesn’t really convey why Bruce took his hatred of his father to such an extreme.

While his father seems to follow the prototypical strict patriarch we’ve come to know about Asian parents, he’s never seen physically abusing Bruce or neglecting him in any way. If anything, he’s fairly supportive as far as Chinese fathers go, paying for his martial arts training and sending him to elite educational institutions. Initially, his father throws up some resistance to the idea of Bruce becoming an actor and wants him to return to China, but is that really a reason not to attend your father’s funeral?

While this could have been the actual reason, I didn’t find it to be particularly believable. Perhaps more exploration into their relationship would’ve yielded more believable results. As it stands, their relationship was more of a caricature and it comes off as a recycled storyline we’ve seen in every play exploring the dynamics of an Asian family.

Then again, no one really watches Kung Fu movies for the plot lines, and maybe that’s how we should treat this play. I can’t remember what the plot of Enter the Dragon was, but I can certainly remember Bruce Lee making short work of O’Hara. If you enjoy martial arts and theater, this production is worth your time.