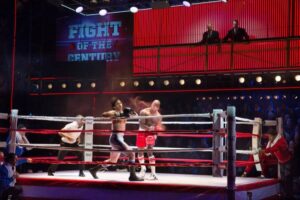 Yo, Adrian. They did it.

There’s a confluence of factors that make Rocky one of the most entertaining, moving and thrilling spectacles on Broadway in recent history. It pays homage to the original 1976 Oscar-winning cannon, brilliantly and effortlessly fuses together underdog and love storylines, and still maintains a dazzlingly unique theater-going experience. There’s just nothing quite like it out there.

For the rare few who aren’t familiar with the original film, Rocky Balboa is an out-of-luck club circuit boxer whose life seems headed nowhere. He barely makes enough to cover the rent by shaking down deadbeat borrowers for money. In his spare time, he toils away at the local gym, dreaming of being an elite boxer. His other dream has always been to be with his childhood crush, Adrian. Heavyweight champion Apollo Creed has a match set in Philadelphia, but due to his opponent breaking his hand, Creed is in search of a new rival. That person becomes Rocky, who faces insurmountable 80-to-1 odds against Creed. The odds should be even higher considering that Creed has never been knocked down in his career, nor gone beyond five rounds before ousting opponents.

The tricky part of this play is balancing the two main plots. There is Rocky the lover. Then, there is Rocky the fighter. In the hands of a lesser playwright, one would likely overshadow the other, or, at the very least, one would seem forced. But instead of the storylines clashing with one another, they harmoniously complement one another.  In the end, there’s just Rocky with no qualifications. The romance is both powerful and sweet, and both characters are completely endearing. The play also goes into appropriate depth with Rocky’s existential crisis. We all know that Rocky is more than just a feckless thug and a worthless bum, but seeing him arrive at that conclusion is well worth the journey. That journey isn’t possible without showing his tender side, which is why the two plots work so seamlessly.

Proper homage is paid to the original movie, but the Broadway production isn’t overrun by it. Rocky runs up the stairs of the Philadelphia Museum of Art and we’re simultaneously motivated and nostalgic. We don’t hear Eye of the Tiger until Act II. We’re not treated to the Rocky Theme until the final bout. Andy Karl’s portrayal of Sylvester Stallone’s original character has Stallone’s drawl, but also his own edge. Terence Archie (Creed) and Margo Seibert (Adrian) also give exceptional performances. There’s always the danger of having the Broadway version trying too hard to be like its predecessors (see Spiderman: Turn off the Dark), but that isn’t the case here.

Instead, we’re left with a masterful production of perfectly choreographed sets and scenes. The acting itself is as flawless as the change of locations. In the final bout, the audience sitting in the first 15 rows is invited on stage to see the bout, while the audience to either side is encouraged to stand and cheer for Rocky as the ring extends out on to the stage. The fight itself is its own gem, with realistic injuries and boxing maneuvers. Do this step wrong, and it comes off as too much of a gimmick. Do this right (and it was), and it becomes a memorable and thrilling ending.

And that’s exactly how the audience feels when they leave the theater. Rocky concluded to a rousing and well-deserved standing ovation and left an impression on me many hours later.